The Barbour family bought Bolesworth Castle in 1856. Robert Barbour (1797-1885) came down to Manchester from Glasgow in 1815 and set up a cotton trading business there called Robert Barbour & Brother. Manchester was heavily polluted and he decided to move his family to rural, sociable Cheshire. He was a deeply religious man and believed that God intended him to do his work there. Bolesworth Castle has been built in 1826 by the Cheshire architect William Coles a pupil of Thomas Harrison of Chester. It was built on the footprint of an earlier house dating from 1750.

The lake was dug in 1790 and its stone bridge was the work of Robert Mylne (1734-1811), a Scottish architect and civil engineer, well known in his day. He built the original Blackfriars Bridge over the River Thames in London.

In a true love match his grandson, another Robert Barbour, married the spirited and beautiful Ida Payne and employed Clough Williams-Ellis to transform Bolesworth into a twentieth-century home. His sudden death, falling from his horse, put his eldest son Richard in charge of Bolesworth in 1928 at the age of seventeen. Ida held the family together through the Depression of the thirties and by the outbreak of the Second World War that carefree family life revolving around hunting and horses had been re-established. Her children all joined up and Ida held the fort during the war years. It was Richard’s marriage in Palestine at the end of the war which split the family in two and fortunately, because Richard was an arch filer of correspondence, the story can be told through family letters.

However, Richard’s skilful and sometimes unorthodox management of the Estate in the fifties and sixties, throwing off the stranglehold of post-war restrictions and gloom, set the scene for his adopted son Anthony to develop it into the successful business it is today. Along the way the painful family rift was mended and now Bolesworth, once again a happy family house, is embracing the twenty-first century.

HOME OF THE BARBOUR FAMILY FOR OVER 160 YEARS

The book not only records the nuances of household and estate management, but is filled with fascinating information from the Bolesworth Castle archives including personal letters, scrapbook entries, newspaper cuttings, reports and a myriad of photographs. Importantly too, as with any family, it shares moments of intimacy and of acute difficulty throughout the political, social and economic upheavals of several generations. Without doubt it is a legacy to times past where life was filled with days of pleasure but countered by moments of extreme heartache. Diana Barbour has succeeded in bringing the entire Barbour family back together and is testimony to her skills and determination. Importantly too, the fact that Anthony Barbour was an inspiration to his daughters, Nina and Cleo, and that he was successful in shaping the future of Bolesworth, is never in doubt. 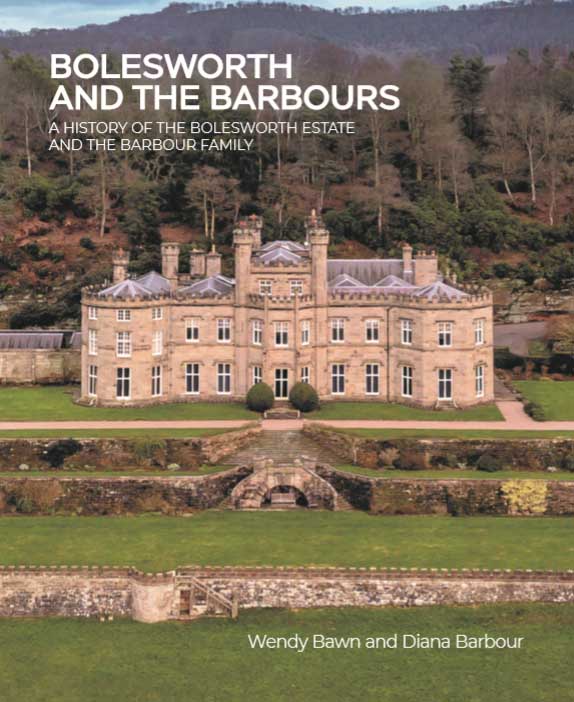 Copies of the book may be purchased from The Bolesworth Estate – please contact info@bolesworth.com or telephone 01829 782210 to get your copy.

Be the first to receive all the latest news, stories and event information from the Bolesworth .

Blade is a straightforward multi-functional WordPress Theme in which Flexibility and Simplicity exist side-by-side.

Pre-book your tickets for Christmas at Bolesworth

Bolesworth will be transformed into a illuminated winter wonderland this December. The magical 1.2 mile trail promises a dazzling after-dark experience for all of the family.

Simply fill in the form below and our trade stand sales team will be in touch in due course.

Simply fill in the form below and our team will be in touch to discuss your requirements.

Simply fill in the form below and we will ensure you are the first to hear about ticket updates and special events. You can unsubscribe at any time, by updating your preferences at the bottom of our emails.